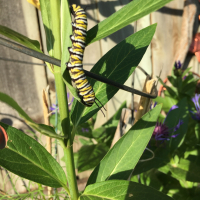 Flowergirl Legacy
September 2017 in Resources
It is easy to get caught up in information overload... a reminder to review the source and look for reputable sites and programs.